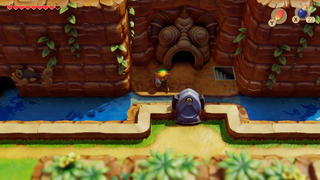 The Angler's Tunnel is the fourth Dungeon in Link's Awakening.[1][note 1] It is the location of the Surf Harp. The entrance to Angler's Tunnel, which is shaped like a Fish's head, is behind a raging waterfall at the base of the Tal Tal Mountain Range. The mini-boss of the Dungeon is Cue Ball, whose backside is vulnerable to Link's Sword. The main item of this Dungeon is the Flippers, which allow Link to swim and dive. This is necessary for fighting the Boss, the Angler Fish.

Entrance to the Tunnel

Much like Tail Cave and Key Cavern, Angler's Tunnel requires a Small Key, the Angler Key. It is located in the Yarna Desert,[3] east of Animal Village. A sleeping Walrus blocks Link's path,[4] and thus he must return to Mabe Village and ask for Marin's assistance. After being taken to the Walrus, she sings the Ballad of the Wind Fish, waking the Walrus and allowing Link to pass.[5] Marin then goes to sing for the animals in Animal Village.

The Angler Key is guarded by a Lanmola, who will drop it once defeated. With the Angler Key in hand, Link travels to Tal Tal Heights, where the Angler Keyhole is embedded in the rock before a waterfall. Upon inserting the Angler Key into its Keyhole, the waterfall stops and reveals a riverside tunnel in the shape of a large Fish. However, to actually get into the Dungeon, Link must climb the Tal Tal Mountain Range and drop down from a cliff.[6]

The interior of this Dungeon is mostly gray flooring with blue-green walls. This Dungeon also has a few blue-green tiles and is flooded in a few areas. To get past these flooded areas, the Flippers are required, which are the item contained in the Dungeon. However, to reach it Link must fight the mini-boss, Cue Ball. Link fights this monster in a room with some shallow water and a large column, forcing both Link and Cue Ball to move on the edges of the room. Cue Ball is large, and takes up all of the space between the column and wall, forcing Link to run from him. Only Cue Ball's backside is vulnerable to Link's Sword. Defeating this monster allows Link to reach the room where the Flippers are hidden.

There is a tile puzzle in the next room, which can be solved by stepping on the Flashing Tiles in the correct order.[7] This order must also be used for another identical set of tiles elsewhere in the Dungeon, despite that set not flashing. This opens the way to the Nightmare Key, which unlocks the room where the Boss, the Angler Fish, is fought. The battle takes place underwater, and the Angler Fish attacks by charging at Link and the wall. Hitting the wall makes rocks fall from the ceiling. Smaller Fish also swim through, who can be killed with one swing but do not charge Link directly.

When looked on the Map, the Dungeon is in the shape of either a small Fish or a Fishing Hook. Water is a very important aspect of the Dungeon, as it was originally behind a waterfall and many areas can only be accessed by swimming.

In the Link's Awakening manga by Ataru Cagiva, after Link defeats the Lanmola and obtains the Angler Key, the Owl mentions that Angler's Tunnel is found in the eastern part of the Tal Tal Mountain Range. After finding the entrance, Link uses the Angler Key to stop the waterfall and gain access to the interior. Once inside, Link defeats various enemies and Hydrosoar to finally access the underwater chamber where the Angler Fish is found. While fighting it, Link breaks his Sword after stabbing the Angler Fish's head, defeating it in the process. He then exits the dungeon with the Surf Harp in hand.