"This spear is the result of countless hours of research into the ancient technology of used by Guardians. The glowing spearhead has high piercing potential."
— Hyrule Compendium

The Ancient Spear is an item from The Legend of Zelda: Breath of the Wild. It is a spear crafted with the ancient Sheikah technology. Its development is the result of countless hours of research into the ancient technology of Guardians by the Sheikah ancient technology researcher Robbie. Like other ancient weaponry, it has a spearhead made of pure energy only appears when drawn (or mounted in Link's House). Its glowing spearhead has high piercing potential rivaling some of the most powerful metal spears. As it is a spear it focuses on piercing power and lacks the cutting power to grass, though can still be used to break pots.

Link can have one forged by the Ancient Oven Cherry at the Akkala Ancient Tech Lab after lighting the lab's Furnace with the Blue Flame obtained from the Ancient Furnace on Tumlea Heights in Deep Akkala during the "Robbie's Research" Side Quest (Link only has to restore power to Cherry and the lab's Travel Gate to forge Ancient Soldier Gear and does not need to talk to Robbie or complete the quest itself, however the furnace can only be lit during the side quest which is received from Purah after "Locked Mementos" Quest is completed). Cherry requires 15 Ancient Gears, 5 Ancient Shafts, 2 Ancient Cores, and payment of 1,000 Rupees to forge one Ancient Spear. As long as Link has the necessary Ancient Materials and Rupees as well as a free space in his weapons inventory he can purchase additional Ancient Spears from Cherry, allowing him to obtain replacements. 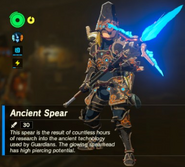 Link wielding an Ancient Spear in the inventory screen 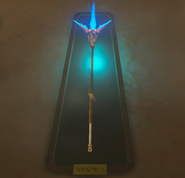 Retrieved from "https://zelda.fandom.com/wiki/Ancient_Spear?oldid=541617"
Community content is available under CC-BY-SA unless otherwise noted.