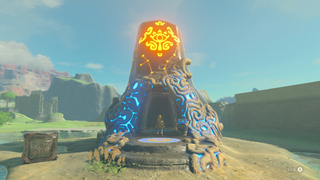 The Oman Au Shrine, one of the many Ancient Shrines

Dungeons
Sheikah Towers
Ancient Shrines are dungeon-like puzzles in Breath of the Wild.[1][note 1]

After the Sheikah helped to seal away Calamity Ganon, they built the Ancient Shrines to serve as training grounds for the hero as he prepared for the revival of Calamity Ganon.[3] There are initially 120 Ancient Shrines scattered throughout Hyrule. The Ancient Shrines appeared long before the events of Breath of the Wild, but began to glow after Link activated the Great Plateau Tower.[4] In order to enter an Ancient Shrine, Link must unlock the entrance by pressing his Sheikah Slate to a pedestal at a Shrine's entrance. Shrines that have not yet been unlocked glow an orange light, and glow orange and blue once their entrance has been opened. Upon completion, Ancient Shrines only glow blue.

Link is lowered into each Ancient Shrine by an Elevator Platform, and each Shrine contains a series of traps and obstacles to be overcome as part of a trial. At the end of every Shrine is a Monk, who are the creators of the trials inside.[5] The Monks will present Link a Spirit Orb for successfully reaching them. The first four Ancient Shrines also contain Runes which add functionalities to the Sheikah Slate, bestowing Link with new abilities. Each Shrine contains various amounts of Treasure Chests alongside the Spirit Orbs bestowed by the Monks. A Treasure Chest icon will appear next to the Shrine's name on the Map once all Treasure has been collected.

After completing all 120 Ancient Shrines, Link is instructed to head to the Goddess Statue in the Forgotten Temple, where he will obtain the Wild Set.[6][7]

After completing all four Divine Beasts and beginning The Champions' Ballad DLC Pack, Link can access 16 new Ancient Shrines across Hyrule. This expansion raises the total number of Shrines to 136. These Shrines have a tall pillar on their top to differentiate them from regular Shrines and their Map icon is likewise slightly edited to match. Four of them are found on the Great Plateau, while the four Regions coinciding with a Champion contain three Shrines each. Link must complete a Trial to access each of these Shrines. Link is rewarded with Spirit Orbs as usual at the end of the four Great Plateau Shrines, but is instead given Emblems related to the Region's respective Divine Beast for the rest of the Shrines.

See here for the names of each particular Ancient Shrine in Breath of the Wild.