"The blade of this sword was made using an ancient power lost to this modern age. Its blade appears only when drawn, and its cutting power surpasses metal swords."
— Hyrule Compendium

The Ancient Short Sword is an item from The Legend of Zelda: Breath of the Wild. It is a sword crafted with the ancient Sheikah technology. It was developed through research of the Guardian and ancient technology researcher, Doctor Robbie as Ancient Soldier Gear, Anti-Calamity armaments he developed to be wielded by Link after he awoke from the Slumber of Restoration. Like the Guardian Sword and other ancient blades, its energy blade only appears when drawn (or mounted in Link's House) and its cutting power is said to suprasses metal swords. However the Ancient Short Sword cannot be obtained from Guardian Scouts.

Instead it must be forged by the Ancient Oven Cherry at the Akkala Ancient Tech Lab after Link lights the lab's Furnace with the Blue Flame obtained from the Ancient Furnace on Tumlea Heights in Deep Akkala during the Side Quest "Robbie's Research". Cherry requires 15 Ancient Springs, 5 Ancient Shafts, 2 Ancient Cores, and payment of 1,000 Rupees to forge one.

The Ancient Short Sword has a base attack power of 40 making it equal to the Guardian Sword++ in terms of base attack power, however the Ancient Short Sword has greater durability and is forgeable allowing replacements to be more easily obtained. Due to being made of ancient technology, it does not attract lightning nor does it burn when exposed to fire allowing it to be wielded during thunderstorms and areas of volcanic heat. 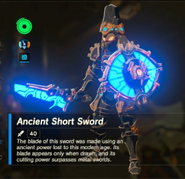 Link wielding the Ancient Short Sword in the inventory screen

Retrieved from "https://zelda.fandom.com/wiki/Ancient_Short_Sword?oldid=540346"
Community content is available under CC-BY-SA unless otherwise noted.