"This shield was made using ancient Sheikah technology. Its surface glows blue when raised in defense. Enhanced functionality allows it to deflect Guardian beams."
— Hyrule Compendium

The Ancient Shield is an item from The Legend of Zelda: Breath of the Wild. It is a shield with a defense rating of 70, which is the same as the Royal Guard's Shield. However, the Ancient Shield has greater durability and is far easier to obtain as it can be crafted by Cherry. By blocking with this shield, Link can reflect most laser beams back at the attacker, making this shield very useful against all types of Guardian and certain bosses, though Link must use the Perfect Guard or the shield's durability will still be damaged by the attack. Additionally as it is constructed with Ancient Technology it is boosted by "Ancient" armor set's Ancient Proficiency set bonus which increase damage caused by the Shield when reflecting lasers.

Like other pieces of Ancient Soldier Gear, the energy shield only activates when wielded or mounted, yet remains deactivated when dropped. In fact its default Hyrule Compendium picture acquired from Purah's Guidance Stone through Symin depicts it deactivated as the only way to take its picture with the energy shield activated is when mounted in Link's house though this applies to all Ancient Soldier Gear that isn't Armor.

This high-tech shield was created using Ancient Sheikah technology that Link can have Robbie's Ancient Oven Cherry forge it at the Akkala Ancient Tech Lab after completing the side quest "Robbie's Research". Robbie requires a payment of 1,000 Rupees and 10 Ancient Gears, 15 Ancient Springs, and 1 Giant Ancient Core for Cherry to craft one for Link. 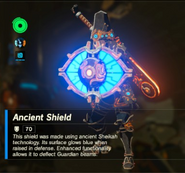 Link wielding an Ancient Shield on the inventory screen

Retrieved from "https://zelda.fandom.com/wiki/Ancient_Shield?oldid=542349"
Community content is available under CC-BY-SA unless otherwise noted.