It has been suggested that this article or section be merged with Sea Chart. 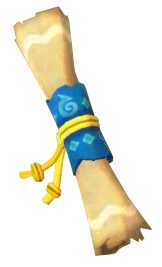 Sea Chart
The Ancient Sea Chart,[1] also known as Skipper's Sea Chart,[2] is an item in Skyward Sword. It is an old sea chart that used to belong to Skipper, and shows the Lanayru Sand Sea's condition as a large body of water in its past state.[3]

After hearing of Link's search for Nayru's Flame, Skipper requests his assistance in finding the Sandship.[4] He says that Link's current map looks odd, and that he needs a proper sea chart, the Ancient Sea Chart, to help him navigate the dangerous waters of the Lanayru Sand Sea sucessfully.[5] He then helps him by telling him that the Ancient Sea Chart can be found within his cabin at Skipper's Retreat, and instructs Link to travel there using his boat.[6] The Ancient Sea Chart can be found buried under some sand in Skipper's Cabin, which requires the Gust Bellows to blow away. Using the chart, Link is able to explore the rest of the Lanayru Sand Sea and reach his next destination, the Lanayru Shipyard.

Charts in The Legend of Zelda series
Community content is available under GNU Free Documentation License unless otherwise noted.
Advertisement