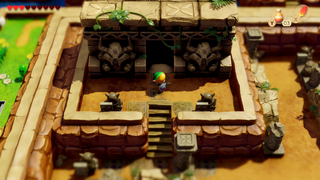 The Ancient Ruins are a recurring dungeon in The Legend of Zelda series.[1][2][note 1]

The region features sandy terrain, with the sand covering a decorated stone path on the ground. Cracked stone walls and broken columns make navigating the area complicated as the path cannot be followed. Many Armos statues are situated among the Ruins, though approaching some of the statues reveal them to in fact be living enemies. Gels and Zols are also found in the area.

A set of stairs leading underground can be found by moving one of the Armos statues. A Secret Seashell can be found here, which is replaced with 20 Rupees if the Koholint Sword has already been obtained.

The Ancient Ruins is a short, linear Dungeon that is guarded by an Armos Knight. Defeating it will reward Link with the Face Key, which unlocks the entrance to the Face Shrine.

At the end of the Ancient Ruins, Link comes to a room with a relief known as the Writing on the Wall. The relief is written in a riddle-like tone and reveals the secret of Koholint Island and its guardian Wind Fish. It is seemingly addressed to Link directly, and explains that Koholint Island is nothing but an illusion dreamed by the Wind Fish, all of which will completely vanish as soon as the Wind Fish is awoken.[5]

The Owl appears outside of the Ruins after Link learns of Koholint Island's secret and informs him that only the Wind Fish knows for certain if it is true.

The Dungeon is located in the Tarm Ruins and holds the Blowing Wind, the sixth Essence of Nature. After retrieving the Nurturing Warmth from the Unicorn's Cave, Link receives a telepathic message from the Maku Tree, who will direct him towards the Tarm Ruins in the search of the next Essence of Nature.[6] If in a Linked Game, shortly after, a cutscene shows Twinrova within the Room of Rites. As the resurrection of Ganon draws near, the Flame of Destruction is lit by the chaos and destruction reverberating from Holodrum.[7] At this point, only the Flame of Despair remains unlit. This turn of events inspires a new sense of urgency to collect the remaining Essences of Nature.

The entrance to the Ancient Ruins is found atop Tarm Ruins, at the north-westernmost peak. The Dungeon itself is a tall tower, and is the highest point in all of Holodrum. In order to unlock the gate barring Link from the Ancient Ruins, he must gather the four Jewels scattered across Holodrum. Navigating the Tarm Ruins requires extensive use of the Rod of Seasons.

The Ancient Ruins are five stories high, the most of any Dungeon in Holodrum. They feature sand-colored floors and walls, giving it the feel of an ancient Egyptian crypt. There are many sections of flooring throughout the Dungeon that crumbles under Link's weight, causing him to plummet to his death if he stands in one spot for too long. There is also a section where the walls begin to close in when Link enters, upon which will result in an instant Game Over if Link is crushed by the walls.

There are many bombable walls throughout the Dungeon. One of these walls leads to an unmarked room on the map where a total of 100 Rupees are strewn across the floor. Progressing through the Dungeon requires extensive use of the Roc's Feather, Magnetic Gloves, and the Magical Boomerang. The Sub-Boss of the Dungeon is Vire, Onox's loyal henchman. Using the Boss Key found within the Dungeon, Link faces Manhandla on the top floor of the Dungeon. After defeating Manhandla and obtaining the Heart Container, a staircase to the very top of the tower appears. It is here, at the highest point in all of Holodrum, that Link obtains his sixth Essence of Nature.