Zelda Wiki
Register
Don't have an account?
Sign In
Advertisement
in: Ancient Technology, Hyruleans, Characters, Characters in Breath of the Wild 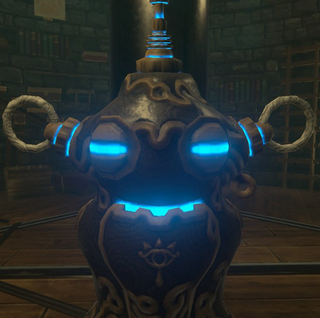 The Ancient Oven,[2] also known as Cherry,[2] is a character in Breath of the Wild. Most of its biography is documented in Robbie's Memoirs.

Eventually, Robbie had an idea that could further increase Cherry's capabilities by automating the manufacturing process alongside the refining process, as well as giving it the ability to speak.[1] The process of upgrading Cherry was extremely difficult, and Robbie even had to leave the idea for a short time.[6] It wasn't until Jerrin arrived that she was able to improve Cherry's designs and give it a voice alongside the ability to manufacture ancient equipment.[7][8] At some point during this time, Jerrin and Robbie got married.[9] After a while, Robbie realized that his interactions with Cherry and him calling it Cherry was hurting Jerrin, so he took it upon himself to remove it's advanced voice programming and rename it to the Ancient Oven.[10] From then on, Robbie vowed to stop calling the Ancient Oven "Cherry" as it would make Jerrin mad.[11]

When Link first arrives at the Akkala Ancient Tech Lab 100 years after the second Great Calamity, the Furnace outside the lab is extinguished, making the Ancient Oven nonfunctional.[12] During the Side Quest "Robbie's Research," Link can carry the Blue Flame and relight the Furnace to activate the Ancient Oven, giving him access to the shop.

When provided with Ancient Materials and Rupees, the Ancient Oven dispenses to Link Ancient Soldier Gear and the Ancient Set.[13][14] The Ancient Oven appears to not recognize Link, referring to him as "FamiliarNameMissing" instead.[15]