Zelda Wiki
Register
Don't have an account?
Sign In
Advertisement
in: Locations in Skyward Sword, Harbors, Lanayru Province,
and 2 more 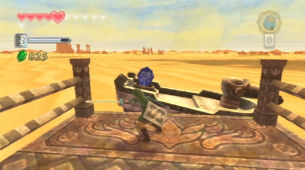 The Ancient Harbor is a location in Skyward Sword.[1] It is an ancient port which linked the land of Lanayru Desert to the ancient ocean, now known as the Lanayru Sand Sea.

The Ancient Harbor served as a port which connected The Surface to the aquatic Lanayru Sand Sea, making it a vital location for trade between the land and the sea for the native Ancient Robots. However, due to the actions of the Lanayru Province's inhabitants, the Ancient Harbor began to decay and ultimately became nonoperational.[2] Now, the harbor is infested with the remnants of shipping containers, Aracha-infested caverns, and large stone pillars hosting Clawshot targets which connect the Ancient Harbor to the Lanayru Caves.

Link first visits the Ancient Harbor while searching for Nayru's Flame so that he can temper his blade. After venturing to a large dock that is situated atop of quicksand, the young hero encounters a dysfunctional Ancient Robot and a small vessel holding a Timeshift Stone. After activating the Timeshift Stone, the affected radius of the stone's powers is replenished, and the Ancient Robot is reactivated. The Ancient Robot reveals his name to be Skipper and tells Link that he was the captain of the Sandship. However, a gang of pirates led by LD-002G Scervo took the ship from Skipper and his crew, in an attempt to get their hands on the ship's main power source, Nayru's Sacred Flame.[3] After finishing the tale, Link and Skipper begin to travel around the sand sea, looking for clues that revolve around the Sandship's location at Skipper's Retreat, Lanayru Shipyard and the Pirate Stronghold. After Link tempers his blade with Nayru's Flame, he can return to the harbor to find Skipper, who will offer to take the young hero to the Lanayru Sand Sea or the Sandship.