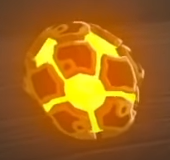 Teli (Sold only when it rains)

Ancient Cores are a rare drop from Guardians in Breath of the Wild. They can also appear in Treasure Chests found in the overworld, within Ancient Shrines, and as amiibo rewards. Like other Ancient Materials, Ancient Cores were made by the ancient Sheikah 10,000 years ago. It is used as a power source for machines.[1]

Link can give three Ancient Cores to Purah at the Hateno Ancient Tech Lab during the "Slated for Upgrades" Side Quest, which will upgrade his Stasis Rune.[3] Alternatively, they can be used at the Akkala Ancient Tech Lab as ingredients to create various pieces of Ancient Soldier Gear, including the Ancient Set, Ancient Short Sword, Ancient Bladesaw, and Ancient Spear. They also count as Monster Parts, which means they can be used with critters in a Cooking Pot to make Elixirs. The Kochi Dye Shop accepts Ancient Cores as an ingredient for Gray Dye, or they can be sold to Kilton at the Fang and Bone in exchange for Mon

Ancient Cores are required to upgrade the following pieces of Armor at a Great Fairy Fountain.

Ancient Cores can be sold to Cheria for 200 Rupees, though they can be sold elsewhere for 80 Rupees.