Zelda Wiki
Register
Don't have an account?
Sign In
Advertisement
in: Ruins, Tabantha Frontier, Locations, Locations in Breath of the Wild 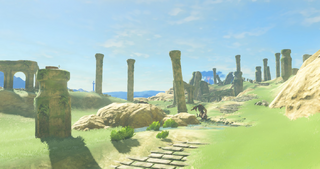 The Ancient Columns are a location in Breath of the Wild.[1]

The Ancient Columns are located on the Rayne Highlands in the Tabantha Frontier. Dozens of ruined stone columns litter the area, some of which have fallen over. There is a small pond in the center of the area, which contains Chillfin Trout. The Columns are also home to Tena Ko'sah Shrine.

Prior to the second Great Calamity, Princess Zelda attempted to investigate the Ancient Shrine using the Sheikah Slate, but she was unable to gain access.[2] When Link approached her, Zelda reiterated her annoyance at having an escort and ordered him to stop following her.[3] During the "Captured Memories" Main Quest, Link can claim the "Zelda's Resentment" Recovered Memory outside of Tena Ko'sah Shrine, which depicts these events.

Two Koroks can be found among the Ancient Columns. One can be revealed by diving into the Circle of Lily Pads in the pond. A second can be found at the end of a Race on the west side of the Columns. When Link uncovers these Koroks, they will each give him a Korok Seed.[4]