Zelda Wiki
Register
Don't have an account?
Sign In
Advertisement
in: Locations in Skyward Sword, Dungeons, Faron Province,
and 4 more 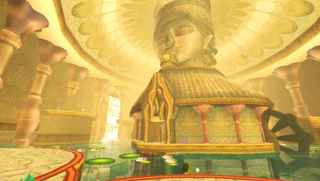 Overview of the central room

Koloktos
The Ancient Cistern is a Dungeon in Skyward Sword.[1]

Entrance to the Cistern

The Ancient Cistern is located behind the Floria Waterfall past the throne of Faron. When Link first meets Faron, she is unable to stop the flow of the Waterfall that blocks access to the Dungeon because of wounds Ghirahim gave her in an earlier battle. She asks Link to find a sample of Sacred Water, which can be found in the Skyview Spring behind the Skyview Temple. After Link heals her with this Sacred Water, Faron stops the Waterfall's flow to allow Link passage into the Dungeon, leaving him to search for Farore's Flame.

A giant stone statue sits at the center of the Ancient Cistern, surrounded by Water. Navigation through the Dungeon is interwoven with Water-themed puzzles, and Link must contend with areas containing streams, stream pools, Lily Pads, waterwheels, and Water-filled high-pressure pipes to proceed.

Although the Ancient Cistern is a serene, Water-themed Temple, the Dungeon's lower level is an ominous abyssal underworld populated with Cursed Bokoblins. This sinister area is full of polluted Water which damages and Curses anyone who makes contact with it.[2]

The Dungeon contains many drains and Switches, due to its nature as a cistern. After Link obtains the Whip that is guarded by a Stalmaster, he can use it to activate many of the Switches in the Dungeon, including raising and lowering the central statue, and flipping over various Lily Pads with damaging, barbed undersides. The Whip is also often used to unscrew the tops of tubes, creating geysers which can lift Link to other destinations. Many sections of the Dungeon are submerged, which Link can navigate easily with the Water Dragon's Scale.

The underground section differs greatly from the rest of the Dungeon, showing puzzles and obstacles based on timing or skill rather than the manipulation of Water. One portion of the underground section has Link fighting off Cursed Bokoblins as the Dungeon's statue falls down from above after he obtains the Blessed Idol. Another section forces Link to climb up a thread as a horde of Cursed Bokoblins attempt to pull him down. In contrast, the upper Dungeon levels prefer to use Water-based puzzles and Whip-activated switches as Link's main obstacles to overcome.