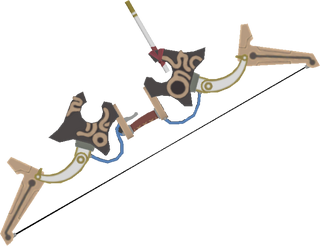 120
Ancient Bows are recurring Items in The Legend of Zelda series.[1][2]

Ancient Bows are obtained from Ancient Oven in the Akkala Ancient Tech Lab. They can be bought for 1,000 Rupees, 15 Ancient Springs, 10 Ancient Gears, and one Giant Ancient Core. They can only be purchased after Link has activated the Ancient Furnace with a Blue Flame. They are the result of Robbie's research into Ancient Technology.[1]

While Ancient Bows have high power and very high durability, their most notable feature is their immense range. Ancient Bows fire Arrows in a straight line for quite some distance before the Arrows become affected by gravity, making them ideal for hitting far-off targets.[1] However, they also have a slow draw speed, being only 70% of a typical Bow.

Ancient Bows are one of only two Bows to have an altered Arrow gravity stat, the other being Silver Bows, though the gravity reduction from Ancient Bows is significantly higher than the latter.

Like other Ancient Technology, Ancient Bows will fold into a more compact shape on Link's back when he's not using them. Being made with Ancient Technology, they will not burn when exposed to Fire or a Scorching Climate, nor will they attract Lightning during storms. In addition, they will also float if they are dropped in water.