Zelda Wiki
Register
Don't have an account?
Sign In
Advertisement
in: Items, Arrows, Items in Breath of the Wild, Items in Super Smash Bros. Ultimate 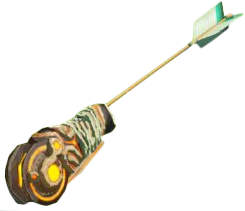 Arrow
Arrow of Light
Ancient Arrows are recurring Items in The Legend of Zelda series.[1]

Ancient Arrows are a special type of Arrow designed specifically for defeating Guardians. They are daggers made from Ancient Technology that were repurposed as Arrows.[2] Robbie created the Ancient Arrows about 40 or 50 years after the Great Calamity.[3]

There are a total of nine Treasure Chests containing Ancient Arrows, all found at Hyrule Castle. Three of them contain one Ancient Arrow, five of them contain a bundle of 3 Ancient Arrows, and one contains a bundle of 5 Ancient Arrows.[4][5] Link can also create them in exchange for Ancient Materials, Arrows, and Rupees by using the Ancient Oven, Cherry, at the Akkala Ancient Tech Lab. They can purchased individually, or in bundles of three or five. Link can also receive one from Beedle at any stable, during what he calls Customer Appreciation Day. It is triggered when Link frees his first Divine Beast.

Ancient Arrows deal moderate damage to Bosses, but heavy damage to Guardians. If an Ancient Arrow strikes a Guardian directly in the eye, the Guardian is instantly defeated. If used on enemies other than Guardians and Bosses, the Enemy and its Weapons will completely disintegrate. Enemies that disintegrate due to the Ancient Arrow will also not drop any Materials.

Arrows in The Legend of Zelda series
Community content is available under GNU Free Documentation License unless otherwise noted.
Advertisement