"I don't know who these two are, Your Highness. But with your permission... I'd be happy to teach them some manners."
— Alfonzo

) is a character from The Legend of Zelda: Spirit Tracks. A Master Engineer, he acts as Link's mentor and helped him become the Royal Engineer. Alfonzo is formerly a master swordsman who once served the royal family as a soldier as his ancestors had done for generations. Alfonzo resides in Aboda Village, and the train station there is part of the same structure as his house. Here, Link may ask Alfonzo to swap out any of the Train Parts that Link has purchased from Linebeck Trading.

According to Hyrule Historia, Alfonzo is the descendant of Gonzo, one of Tetra's Pirates.

Many years before the game takes place, Alfonzo was a knight among the Hyrulean Soldiers. In combat, he wields a two-handed sword. During those years, he earned the title of "Legendary Swordsman", the greatest swordsman in the entire Kingdom. However, he eventually left his position at Hyrule Castle to become a train engineer instead. The title of Master Engineer was ultimately bestowed upon him.

When Princess Zelda and Link flee Hyrule Castle to find the reason behind the disappearing Spirit Tracks, Zelda asks Alfonzo to join her. Eventually he agrees and accompanies them. During the train ride, however, the tracks disappear, forcing Link to use the emergency brake. Alfonzo and Zelda walk outside the train car to see what has happened. Then, Chancellor Cole appears with Byrne who reveals his plot to the trio. Alfonzo stands before Zelda and proposes a challenge to Chancellor Cole, who then asks Byrne to take care of it. After a brief and raging battle with arguing saying that Byrne is not Alfonzo's enemy, Alfonzo is defeated, followed by Link. With the two out of the way, Cole proceeds to expel Princess Zelda's spirit from her body. Cole and Byrne take what remains away with them.

Alfonzo is brought to Hyrule Castle with Link, after being found by the Castle Guards, to get their strength back. He worries about what has become of Zelda, and tells Link that he is responsible for her at this time.

Later, Princess Zelda mentions that the Spirit Train is getting damaged too easily and decides it would be a good idea to find Alfonzo and see if he can help. Link then receives a letter from Alfonzo, who asks to be picked up from the Castle and given a ride home to Aboda Village. Once they arrive, Alfonzo tells Link to visit Niko while he is waiting for Alfonzo to build something. After speaking with Niko, Alfonzo brings out the Spirit Train with a newly equipped cannon, allowing Link and Zelda to proceed to the Snow Realm.

There is a sidequest associated with Alfonzo involving Ferrus. Ferrus asks Link to bring him to Aboda Village so he can meet his hero, Alfonzo. Link agrees and takes Ferrus to Aboda Village. When they arrive, Ferrus talks with Alfonzo and is soon disappointed to find out that he is not the proclaimed Legendary Engineer, but the Legendary Swordsman. However, Ferrus is still grateful and gives Link a Force Gem.

Alfonzo bears a striking resemblance to Gonzo, one of Tetra's Pirates, and his name may in fact be derived from this character. Seeing as some characters from The Legend of Zelda: The Wind Waker and The Legend of Zelda: Phantom Hourglass have had children and grandchildren in between the games, and Alfonzo claims that his family had been serving the Royal House for generations, it is highly likely that he is the descendant of Gonzo.

"He may look like a pirate on shore leave, but Alfonzo is actually a respected engineer and was known as the greatest swordsman in Hyrule. By the way, did you know he's the grandson of Gonzo from the Phantom Hourglass game? Even their names sound similar!"
— Trophy Description

Alfonzo can appear on the Spirit Train stage. While Toon Link is usually seen driving the train, Alfonzo will drive it if a player is playing as Toon Link. Alfonso also appears as a trophy. The Trophy's description reveals that he is Gonzo's grandson. 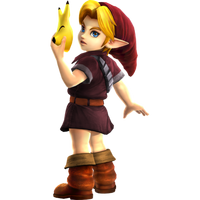 As part of the Phantom Hourglass & Spirit Tracks DLC, Young Link's Standard Outfit (Grand Travels) is a Alfonzo Recolor. It can be obtained on the Grand Travels DLC Map.

Retrieved from "https://zelda.fandom.com/wiki/Alfonzo?oldid=541301"
Community content is available under CC-BY-SA unless otherwise noted.