Zelda Wiki
Register
Don't have an account?
Sign In
Advertisement
in: Hylians, Characters, Characters in Ocarina of Time (Himekawa) 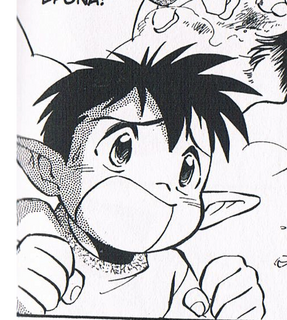 Alf is a character in the Ocarina of Time manga by Akira Himekawa.[1] He lives in Kakariko Village after Link awakens as the Hero of Time.

Soon after Link awakens from his seven year sleep, he sets off across Hyrule Field to venture further and defeat Ganondorf. However, the field had become a complete wasteland. As Link is suffering of thirst and hunger, he approaches Kakariko Village. As he arrives, he is attacked by Impa, who doesn't recognize him and confuses him with the humanoid monsters that sneak into the village. Soon after she reveals her identity, Alf is seen pleading with an older woman to keep Epona and avoid giving her to Ganondorf.[2] Link comes out of a house in which he was resting and calms Epona. Later, Alf suggests that Link stay in Kakariko and live with his family. [3] A few minutes later, Alf peers over the stone wall of the well and is attacked by a strange black mist. The mist begins to strangle him, but Link arrives and slices the mist in half just in time. The mist reveals itself as Dark Link, who Link begins to battle and eventually defeat. Alf is last seen waving goodbye to Link as he leaves Kakariko Village.