The Akkala Citadel was apparently a formidable military fortress during its heyday one hundred years ago and seems to have been important military facility as it features a parade ground and contains several artillery batteries for defense, indicating that it likely played a key role for Hyrule's military as it is the second most imposing fortification in Hyrule after the kingdom's capital Hyrule Castle and Hyrule Castle Town. Though its purpose before the Great Calamity is unclear, its location in Akkala implies that it may have been a military base to defend the entire region as well as a location to mobilize and serve Hyrule's armies in the event of war, and potentially as a fall back point should Hyrule Castle be destroyed or fall as it has several times in the past. It is implied that the Citadel was built over the buried Akkala Tower as it is apparent that part of the ruins were the result of it raising from the ground after Link activated the Great Plateau Tower. Thus it is possible that it was built to protect the towers location, though it is more likely that it was unknowingly built overhead, as the topmost section of the fortress suffered damage from the raising of the tower out of the ground. The fortress was one of the most technologically advanced military structures in Hyrule that was not derived from ancient Sheikah technology, as it is equipped with cannon batteries. This would make attacking it foolish for any monsters or conventional army without access to similar artillery or advanced ancient Sheikah technology and armaments. Thusly, the Citadel when it was in function likely reigned supreme over the entire Akkala region.

Fall of Hyrule and the Last Stand at Akkala Citadel

After the fall of Hyrule Castle to Calamity Ganon during the Great Calamity one hundred years ago, the surviving Knights of Hyrule and Hyrulean Soldiers fell back to the Akkala Citadel. However they were soon attacked by Guardians and monsters loyal to Calamity Ganon during the Age of Burning Fields. This place was where the Knights and Soldiers valiantly made their last stand against Calamity Ganon's forces, but in the end were slaughtered and utterly annihilated. It is implied that all the remaining Knights of Hyrule were killed, leaving Link the only surviving member of the order. Most of the Hylian Soldiers died, though it is revealed that at least one managed to leave behind a descendant indicating the possibility that others did as well. However, no remains can be found with the exception of their weapons and soldier armor. It is implied that this equipment was salvaged by the surviving people of Hyrule and made its way into armor shops such as Ventest Clothing Boutique in Hateno Village. These locations managed to conserve it to be sold to travelers and potential mercenary soldiers-for-hire such as Hoz for protection. The monsters and people seem to have looted any surviving intact armaments wielded by Soldiers and Knights of Hyrule, leaving only rusted out weapons and shields. Over time the citadel's cannon batteries became derelict and inoperable.

A century later, Link can find a Hylian traveler named Nell fighting with a Moblin on the Akkala Bridge Ruins leading to the citadel. Link can assist him by defeating the Moblin and Neil will reward him with Rupees or a random dish or elixir. Neil reveals the history of the Citadel and its role during the Great Calamity. Neil made a pilgrimage to the citadel to honor a Hyrulean Soldier ancestor, but was unable to reach it due to the broken bridge and the patrolling Guardian Skywatchers. The ruins near the tower indicate that they may have been damaged when the Akkala Tower rose from the ground. Pools of Malice surround the tower, forcing Link to destroy Glowing Eyeballs and Magnesis Rune to create paths. He also has to contend with monsters and Guardian Skywatchers stationed around the ruins. Several Guardians litter Torin Wetland to the east of the Citadel, implying they were damaged during the Citadel's last stand. This makes sense as Guardians can be defeated using lower tech medieval weaponry such as swords, bows, and shields with a well-timed Perfect Guard. It is possible the cannons were powerful enough to destroy a number of Guardians as part of a well-coordinated defensive effort. Nonetheless, it is ultimately implied that like Link before them, they were outnumbered and overrun. However, the Citadel ruins and its rusted out inoperable cannons and Guardian remains stand as silent reminders of the epic battle that took place there. 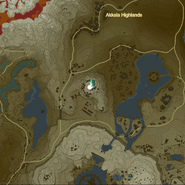 The Akkala Citadel Ruins on the map
Add a photo to this gallery
Retrieved from "https://zelda.fandom.com/wiki/Akkala_Citadel_Ruins?oldid=535122"
Community content is available under CC-BY-SA unless otherwise noted.