"The goal of our Sheikah research lab is simply, really. We aim to destroy the Calamity that has endured across time...to rid Hyrule of its dark influence... and above all...to rescue Princess Zelda, who is now a prisoner of the Calamity. We have worked ourselves to the bone conducting our research. For a time, I feared I'd pass before we could prevail. HOWEVER! You, Link, managed to awaken before this old sack of flesh gave out. That means... THE TIME IS NOW! Hm, yes yes! You! Now is the time to join forces with us Sheikah, yes? We must destroy the Calamity!"
— Robbie

Akkala Ancient Tech Lab is a location from The Legend of Zelda: Breath of the Wild. It is Sheikah technology research lab created by Robbie after the destruction of the Royal Ancient Tech Lab during the Great Calamity where he continued his research into ancient technology. It was built from the remains of the old Akkala lighthouse that existed before the Great Calamity.

Robbie built his lab in the old lighthouse located in Akkala during the Age of Burning Fields some point after escorting Purah to Fort Hateno as Impa, Purah, and Robbie had decided to split up to ensure at least one of them would survive to help Link. While on his way to Akkala, Robbie was attacked by Guardians but he defeated them easily thanks to his knowledge of their weaknesses gained from years of researching them.

Due to the number of broken Guardians within the region which was the sight of an epic battle between the Guardians and surviving Hyrulean Soldiers and Knights that had retreated from Hyrule Castle to Akkala Citadel following the Great Calamity, Robbie was able to find plenty of materials to continue his research into developing ancient weaponry and Armor that he hoped would aid Link in combating the Guardians and Ganon's forces once he awoke. Like the Hateno Ancient Tech Lab Robbie powered his lab using the blue flame to power his furnace and melt ancient materials into ancient soldier gear. He also remodeled his Guidance Stone to create a machine he dubbed Cherry after his first love. He eventually developed the idea to modify Cherry further so she could speak to ease his loneliness, but the task proved too complex forcing him to put his desire to remodel her on hold. When Robbie was around 90 years old, a young female Sheikah named Jerrin, a student of Dr. Purah's who Impa had sent to aid Robbie in his research. She quickly proved herself to be a capable assistant, even managing to complete Robbie's plans to remodel Cherry. Robbie was so taken by her that he eventually married her despite being a least fifty years older than her. However, their marriage was not without trouble, as Jerrin quickly become jealous of the remodeled Cherry and uneasy with its interactions with Robbie who came to rely on Cherry's assistance more and more. Robbie realized the effect this was having on Jerrin so he remodeled the Cherry to speak in a more robotic fashion and began referring to it only as "Ancient Oven" to avoid angering his wife. Eventually Jerrin gave birth to a baby boy she and Robbie named Granté. For a time the three of them lived happily as a family. Unfortunately it was only a temporary peace as Princess Zelda continued to struggle to contain Calamity Ganon under seal within Hyrule Castle. Robbie and Jerrin continued their research and Grante eventually grew into a young man. Grante decided to leave the lab that has been his home to explore the world, with the blessing of his mother and father.

Link first visits the lab as part of the side quest "Robbie's Research", which Link receives from Purah after completing the main quest "Locked Mementos" during the main story. If Link visits the lab before the quest he will find no sign of Robbie or Jerrin and the Ancient Oven Cherry will barely have enough power to even speak.

During the quest itself, Link encounters the Cherry who can barely speak, before Robbie and Jerrin show up and demand to know who he is and what he is doing there. Robbie however vaguely recognizes Link. Jerrin however finds Link suspicious and refuses to talk to him until he has proven himself to be an acquaintance of Robbie's. After Link proves his identity to Robbie by showing him his battle scars left behind by the injuries Link sustained during the Great Calamity that lead him to be placed in the Slumber of Restoration to heal. Robbie is happy that he lived long enough to aid Link in combating Ganon and wants to create some ancient soldier gear for him, but reveals that Cherry has lost power due to his furnace's blue flame going out and asks Link to go to the Ancient Furnace in Deep Akkala to restore power to Cherry. After relighting the lab's furnace, the Akkala Ancient Tech Lab's Travel Gate activates allowing Link to use it as a fast travel point.

After restoring power to Cherry, Robbie allows Link to use her to forge ancient soldier gear in exchange for Rupees and guardian parts. The equipment obtained here is effective for combating Guardians.

With Cherry's power restored, Link can immediately have her create Ancient Soldier Gear without speaking to Robbie. Cherry refers to Link as FamiliarNameMissing as his name is apparently not stored in her memory and Robbie does not correct this error. Despite this quirk, Cherry is fully capable of taking Ancient Materials to use them to craft Ancient Soldier Gear though Arrows are required to craft Ancient Arrows. However as his lab needs funding, Rupees must be paid to Cherry along with the materials. As a result, Cherry is akin to an artificially intelligent vending machine which crafts and dispenses Ancient Soldier Gear.

Along with the Fang and Bone, it is one of the only shops in Hyrule that sells melee weapons and the only place that sells a type of bow (Harth repairing the Great Eagle Bow if it breaks doesn't really count). All Ancient melee weapons, bow, shield, and Armor are available by default thus unlike the Fang and Bone, Link does not have to complete any Divine Beasts to unlock them. It should also be noted that despite its name the Ancient Battle Axe cannot be forged by Cherry as it is not Ancient Soldier Gear, as it considered part of the "Guardian" series weapons which are ancient weapons obtained from defeated Guardian Scouts. Link can purchase additional Ancient weapons, bows, shields, and armor as long as he has available space in his inventory and materials to craft them, thus the shop to replenish his supply of weapons, shields, and bows as they are all powerful and durable. However it requires him to obtain Ancient Materials for crafting and Arrows are needed as materials to craft Ancient Arrows. The Hyrule Compendium pictures for these weapons, bow, shield, and Ancient Arrow can either be taken by Link or purchased from Symin at the Hateno Ancient Tech Lab after "Sunshroom Sensing" is completed.

The Ancient Soldier Armor set is a particularly sound investment as each piece grants Guardian Resist which increases Link's resistance to ancient weaponry and Guardian lasers. Once upgraded by Great Fairy to two stars or higher the set grants Ancient Proficiency which increases the damage caused by ancient and guardian series weapons and bows. Additionally fully upgraded the set has the same defense as the Soldier Armor set though with the added benefit of Guardian Resist. 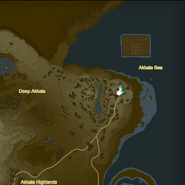 Retrieved from "https://zelda.fandom.com/wiki/Akkala_Ancient_Tech_Lab?oldid=540812"
Community content is available under CC-BY-SA unless otherwise noted.