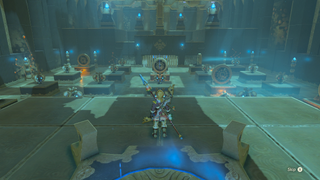 The Akh Va'quot Shrine,[1] designated by the Trial name Windmills,[1] is an Ancient Shrine in Breath of the Wild.

The Akh Va'quot Shrine is located in Rito Village, southwest of the Brazen Beak. As Link enters the Ancient Shrine, he is greeted by the Shrine's Monk, Akh Va'quot.[2]

Akh Va'quot Shrine features a central chamber containing six fans and 14 windmills. In order to complete the Trial, Link must strike the Switches accompanying the fans to rotate them in an order that hits all windmills at once. Once this is done, a portcullis leading to Akh Va'quot will rise allowing Link to speak to him. He will give Link a Spirit Orb for completing the Trial,[3] and will wish Link well before fading away.[4]

A room behind the elevator features a long pool of water and a floating platform holding a Switch and a fan that will release a portcullis protecting a Treasure Chest containing an Ancient Core. Two niches along the wall of the pool contain two Treasure Chests, containing a Sapphire and a Feathered Spear respectively.