Not to be confused with Agahnim, a boss in A Link to the Past.

Agunima is a Boss in Oracle of Seasons.[1] It is a mysterious wizard that appears as a the middle boss in the Dancing Dragon Dungeon.

Agunima is similar in appearance to both Carock and the aformentioned Agahnim, as well as Wizzrobes, which also first appear in Dancing Dragon Dungeon. Like Agahnim, he also splits into three; two copies and one real. He and his copies will appear in various locations throughout the room and attack with balls of magic. Unlike those used by Agahnim, these cannot be deflected by a blade, nor can they be stopped with a Shield. With the lights out, Agunima cannot be harmed at all; but if Link lights the torches in the center of the room using Ember Seeds his true form will become vulnerable, similar to the technique of Darkness used by Ganon. The copies will remain invulnerable, but with the lights on Link can discern the real Agunima from the copies by being able to see his shadow. Striking him with the Wooden Sword will cause damage and cause him to stop casting magic briefly.

As with other middle bosses, upon destruction Agunima will leave behind a Fairy and a warp that will lead Link to the start of the dungeon. When defeated, Agunima spins on the spot briefly before exploding, similar to Agahnim spinning on the spot after being defeated in A Link to the Past. 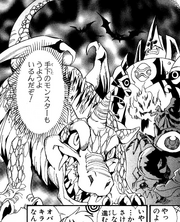 Agunima (above Gohma) depicted with other monsters in the manga

Agunima makes a brief appearance in the Oracle of Seasons manga by Akira Himekawa depicted in a cutaway showing various monsters and bosses from the game alongside General Onox. In this scene, these monsters are simply described as minions of Onox. Unlike other monsters depicted here, Agunima does not make any further appearance in the manga.