"Agatha, Princess of the Insect Kingdom. Of all the allies the Hero would have on his long journey, few would be as odd as the self-described princess of the insect kingdom from the Era of Twilight. Agitha, as legends state, once asked the Hero of her time to gather the Golden Bugs of the land for an elaborate party. This obsession with bugs has carried over into battle. During battle, Agitha will regularly skip around and collect bugs, and while this may seem out of place for a war, she will instantly change your mind when her friends are in danger."
— Agitha, Princess of the Insect Kingdom Historical Entry Tutorial Bio

, Agitha?) is a playable character from Hyrule Warriors and Hyrule Warriors Legends. She is a young Hylian girl from the Era of the Twilight who loves insects and claims to be the Princess of the Insect Kingdom. Despite her sweet, innocent nature, she comes to Hyrule's defense during the War Across the Ages.

Agitha appears as a young blonde Hylian girl who wears her hair styled into twin ponytails. She wears a dress with butterfly wings on the back and a butterfly design on the skirt, which follows her insect theme. Her style of dress appears to be based on real world Lolita fashion, a fashion subculture based on Victorian clothing that originated in Japan. 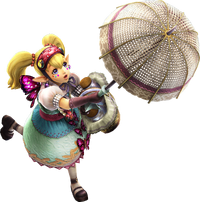 Despite her innocent appearance, Agitha is surprisingly a capable warrior. She fights using her Parasols and a basket containing Bottles that she uses to store insects. Though her claims of being the Insect Princess may seem dubious and appear to be little more than the fantasy of an innocent child, Agitha's ability to command and summon Golden Bugs is quite real. She can summon a Giant Golden Butterfly and a Giant Golden Beetle to attack enemies. She also carries an assortment of insects, such as a Goddess Butterfly that can lead Agitha (and her allies) to any object or person she desires. She can also use her Parasol as an improvised parachute, allowing her to float down to the ground. She is apparently capable of using magic as she uses a Magic Circle to summon her Golden Beetle. In the Land of Twilight story scenario, she is able to pick the lock on a gate, a skill she claims to have learned from her termite friends.

Dark Agitha is Agitha's shadowy doppelgänger. Like most doppelgängers (save for Dark Link) in Hyrule Warriors, Dark Agitha has no role in the main story and appears as an enemy in Adventure Mode. She uses the same moveset and drops the same Materials as Agitha.

According to Hyrule Warriors producer Hayashi, Agitha was added to the game because "about 95% of the development team fell in love with her". 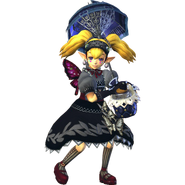 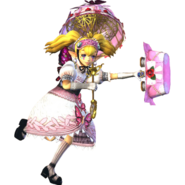 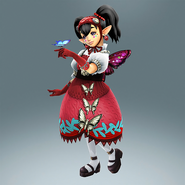 Agitha in her Crazy Tracy recolor

Retrieved from "https://zelda.fandom.com/wiki/Agitha_(Hyrule_Warriors)?oldid=542434"
Community content is available under CC-BY-SA unless otherwise noted.