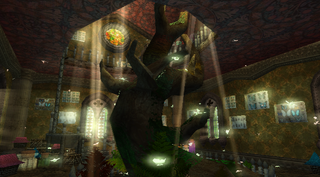 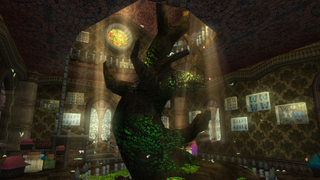 Agitha's Castle is a location in Twilight Princess.[1]

Home to the self-proclaimed princess Agitha, it is located on the south road of Hyrule Castle Town.[1] When Link meets Agitha inside her Castle, she mistakes him for a bug and goes on to tell him that she sent invitations to 24 Golden Bugs around Hyrule for the ball. Unfortunately, it seems none have arrived, and she asks for the young hero's help in bringing all the bugs to the castle.[2] If Link brings her a Golden Bug, she will reward Link with Rupees for his troubles: 50 Rupees for bringing a bug, and 100 Rupees for bringing in both the male and female pairs of the same bug.[3] The first time that he brings Agitha a bug, Link is given a Big Wallet, which allows him to hold up to 600 Rupees rather than 300.[4] Bringing all 24 bugs to the Castle rewards Link with the Giant Wallet, which holds 1000 Rupees. If Link tries to walk out of the Castle even though he still has bugs on hand, she will mention it as he leaves.[5]

The inside of Agitha's Castle reflects her deep passion for bugs. Plastered all over the walls are posters of various insects, and there are many empty Bottles as well. In the middle of the room is a giant tree where many of the bugs can be found once Link brings them in. However, extra bugs can be seen in Agitha's Castle later on.