"...Oh, boy! I thought you were a giant grasshopper! But you're not! You're a person! Still, you're wearing those clothes, so that tells me you like bugs too! Oh, boy, I forgot the formalities! You have an audience with the princess of the bug kingdom. Agitha is my name!"
— Agitha

) is a character from The Legend of Zelda: Twilight Princess. Agitha is the self-proclaimed "Princess of Bugs," but she is not truly a member of any royal family. She lives in her "castle" in the western thoroughfare of Hyrule Castle Town, and is a collector of Golden Bugs. According to her card in the official trading card deck, as well as Nintendo's guide book, she is ten years old. 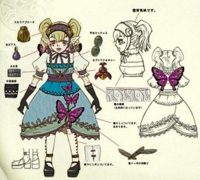 Agitha, Princess of Bugs, resides within her "castle" in the southwestern part of Hyrule Castle Town. When Link first meets Agitha, if he is wearing the Hero's Clothes, she mistakes him for a grasshopper or if he is wearing the Zora Armor she refers to him as a jewel beetle. As soon as Link talks to her, she says that she is planning a ball for all the Golden Bugs in Hyrule. As none of them have shown up however, Agitha asks of Link to search for them and bring them safely to her. There are a total of 24 Golden Bugs to be found throughout Hyrule, 12 different varieties with a male and female of each. These gold-tinted bugs are easily identified by the bright glow they emit. If Link leaves Agitha's house while holding bugs that have not been given to her, she will hiss at him and say, in an accusing tone, that she knows he has bugs.

For the first Golden Bug that Link gives to Agitha, she rewards him with a Big Wallet, which can hold 600 Rupees (1,000 in Twilight Princess HD). Also, for the first bug in each pair Link is given 50 Rupees, and when the second in the pair is given to Agitha, he gets 100 Rupees. Once a Golden Bug has been given to Agitha for her ball, they can be seen either crawling or flying around her "castle". When all 24 bugs have been given to Princess Agitha for her ball, she declares that Link's deeds will forever be known in the insect kingdom. He is also granted "honorable citizenship", and as a memento, given the Giant's Wallet that can hold 1,000 Rupees (2,000 in Twilight Princess HD), the largest amount that can be carried at any one time in the game.

During daytime, Agitha can be found in the flower patches in the field south of Hyrule Castle Town, but during this time, Link cannot present her with Golden Bugs, although Agitha will always be in her castle if Link is to go there. Agitha will no longer be outside when it is evening. If Link encounters her outside in wolf form, she shows no signs of fear unlike most people, even referring to him as "puppy" and asking if he wants to play.

"Agatha, Princess of the Insect Kingdom. Of all the allies the Hero would have on his long journey, few would be as odd as the self-described princess of the insect kingdom from the Era of Twilight. Agitha, as legends state, once asked the Hero of her time to gather the Golden Bugs of the land for an elaborate party. This obsession with bugs has carried over into battle. During battle, Agitha will regularly skip around and collect bugs, and while this may seem out of place for a war, she will instantly change your mind when her friends are in danger."
— Agitha, Princess of the Insect Kingdom Historical Entry Tutorial Bio

Agitha is a playable character in the spinoff game Hyrule Warriors.

She is the self-proclaimed princess of the insect kingdom, from the Era of Twilight. Agitha keeps a bright smile on at all times and looks at the world through a sweeter lens than her allies. Agitha wields Parasol as her standard weapon moveset, though her real strength resides in the bugs she summons forth in times of need, such as a giant beetle or a magnificent butterfly.

In addition to her standard outfit, she has two recolors of it as unlockable DLC in Adventure Mode. Her Standard Outfit (Master Quest) is a Black Lolita Recolor and her Standard Outfit (Twilight) is a Sweet Lolita Recolor (which interestingly, matches her Level 3 Princess Parasol). She also has the Don Gero's Mask as her unlockable Mask outfit from the Majora's Mask DLC.

In Legend Mode, Agitha is saved from Cia's army of Bulblins by Lana and as a reward, she shows Lana her special Goddess Butterfly which can lead one to anyone or anything they wish to locate. Lana asks for it to lead her and her allies to the location of the Twilight Era's Gate of Souls. However the Butterfly is captured by Midna who traps it in a magic sphere, thinking it is poisonous. Agitha is quick to correct her and reveals the butterfly's special power, which intrigues Midna. Midna frees the Butterfly and asks it to find "that ugly witch", who turns out to be Cia. Agitha is unhappy with this and Lana promises to get it back from Midna while Agitha retreats back to the village, resulting in a fight between Midna and Lana's forces. After Midna is defeated by Lana, Agitha joins her and Midna as they travel to the Twilight Realm where the Gate of Souls resides, where she aids them in their fight with Zant. If the player chooses to play Midna in the Temple of the Sacred Sword then Agitha will active the Sealed Statue of Twilight instead of Midna.

Agitha returns as a playable character and uses the same moveset from Hyrule Warriors. Her role in the main story is unchanged. Her Standard Outfit (Great Sea) is a Gothic Lolita Recolor of her standard outfit. All of her previous DLC Outfits from Hyrule Warriors can be unlocked in Adventure Mode.

"A strange young girl who lives like a fairy-tale princess in Hyrule Castle Town. She has an eccentric attachment to Golden Bugs. In exchange for these bugs, Agitha gives you wallets and Rupees. Whether or not you actually have any bugs, Agitha suggests that you must be hiding them from her."
— Trophy Description

Agitha appears as a collectible trophy.

Agitha's name may be based on the Agatha genus of snails. Her japanese name is based on Agehachō (揚羽蝶, Swallowtail Butterfly?), which fits with her insect theme.

It is possible that Agitha was inspired by the Heian period folktale, The Lady who Loved Insects (Mushi mezuru himegimi). 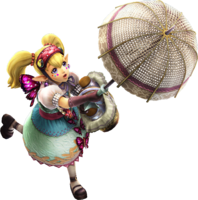 Promotional Render of Agitha with the Parasol from Hyrule Warriors 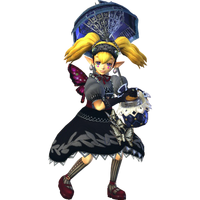 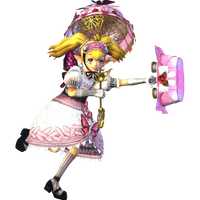 Retrieved from "https://zelda.fandom.com/wiki/Agitha?oldid=540788"
Community content is available under CC-BY-SA unless otherwise noted.