Not to be confused with Agunima, a miniboss in Oracle of Seasons. 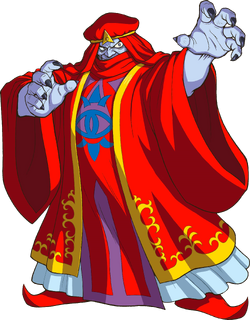 A Link to the Past
Link's Awakening

Agahnim (pronounced /ˈɑː.ɡəˌniːm/, AH-gə-neem)[citation needed] is the powerful evil wizard who serves as the secondary antagonist of A Link to the Past.[2] He kidnaps the Seven Maidens to break the seal to the corrupted Sacred Realm and achieve his goal. While many believe him to be an apprentice of Ganon, he is revealed to be actually the villain's alter-ego.

When Hyrule became besieged by an onslaught of terrible misfortunes, the King of Hyrule offered a reward to anyone who could put an end to these disasters. A mysterious stranger named Agahnim came and put an end to these troubles with a previously unknown magic.[3][4] He was declared a hero and given the prestigious positions of chief advisor to the King, priest, and heir to the Seven Sages.[5][6] Agahnim used this position and his mysterious magic to brainwash all of Hyrule's Soldiers,[7] depose the King of Hyrule,[8] and make six of the Maidens, descendant of the Seven Sages, disappear to the Dark World.[9][10]

After being rescued by Link, Zelda, the remaining last of the descendants, hides in the Sanctuary until Agahnim's troops find her and take her to the tower at the top of Hyrule Castle. There, Agahnim sends her to the Dark World before Link could stop him, thus breaking the Seal of the Seven Sages. He gloats that nothing can stop him now, because the Tribe of Evil is armed with the Triforce, and that evil and darkness will soon overrun the Light World.[11] With this, he seemingly vanishes, but Link is able to quickly discover his whereabouts by slicing open a curtain and revealing a hidden chamber where he duels the Dark Wizard, turning his own magic against him. But before Link can soundly defeat him, Agahnim draws him into the Dark World. During his quest to rescue the Seven Maidens, Link learns that Agahnim is a servant, or perhaps a pawn, of Ganon.[12]

When Link defeats Agahnim a second time at the top of Ganon's Tower, he collapses dead, and from his body a faint image of Ganon himself appears. The image turns into a bat and flees to the Pyramid of Power. At the start of the final battle, Ganon reveals that Agahnim was actually his alter ego.[13]

Even with the Master Sword, Link is unable to harm Agahnim directly. He must use the magical blade to turn his own magic attack against him to damage the evil wizard.[14]

When attacking, Agahnim hurls magical beams against Link. The first of them, a magic ball, can be hit with the Master Sword to reflect it, so that it hits Agahnim himself and wounds him. The second one, which homes at Link, can also be hit with the sword, but it splits up and flings fireballs throughout the room. The third one is a lightning attack which Link can only avoid by standing at Agahnim's side (in the first fight). He only does this when facing south from the north center of the room, and it cannot be reflected. If Link attempts to strike Agahnim's body with the Master Sword, he receives a violent electrical shock in consequence, even in Golden form.

While he fights alone in Hyrule Castle, in Ganon's Tower he creates two additional clones of himself to confuse Link. This can work to Link's advantage, as the clones are nearly transparent and only produce magic balls that can be bounced back with the sword and into the real Agahnim.

In Link's Awakening, Agahnim makes an appearance as Agahnim's Shadow, one of the forms taken by the Shadow Nightmares. This appearance is very similar to how he was in A Link to the Past, as is the method of defeating him. This Agahnim is simply a Nightmare, rather than the real Dark Wizard. He uses the main fireball spell, as well as the four-orbed decoy spell.

Though Agahnim himself does not appear in A Link Between Worlds, Sahasrahla mentions a "deceitful wizard" who attempted to revive Ganon during the days of his alleged six-fold great-grandfather,[15] referring to the events of A Link to the Past.

Non-Canon Information
Agahnim appears in chapter 4 of Super Mario-kun volume 4. Mario and Yoshi jump into a lake that takes them to the other SNES games' worlds, the first of which is Hyrule from A Link to the Past. After surviving a Spear Throwing Soldier, many Octoroks, some Zoras and an Armos, Mario (armed with the Master Sword) and Yoshi (in shield form) are attacked by Agahnim. Mario succumbs to his attacks, while Yoshi manages to hurt him by eating his magic bolts and spewing back at him, just barely tearing his robe. Mario gives up, but Luigi, from the "Super Mario World side" of the lake, tosses at him many Super Mushrooms that power-up the Master Sword into the Master Mushroom Sword. With one blow, Agahnim is defeated, and Mario and Yoshi dive back into the lake hoping to come back to their game, ending up instead in F-Zero.

Agahnim appears in the A Link to the Past comic by Shotaro Ishinomori. Like most adaptations of the game, Agahnim is a separate entity from Ganon, rather than his alter ego.

Agahnim first makes an appearance when Link witnesses his uncle being defeated at the hands of the wizard. After the young hero rescues Princess Zelda and takes her to the Sanctuary, Agahnim easily takes her back again to the top floor of Hyrule Castle where, on a full moon, he will cast the final incantation on the princess to open the way to the Dark World and release Ganon.

After Link obtains the Master Sword, Agahnim's preparations to cast the final incantation are complete, but he is soon interrupted by Ganon.[16] He warns the wizard that a "being with intense emotional energy" is approaching the castle,[17] much to Agahnim's surprise.[18] Knowing this, Agahnim decides to wait on casting the incantation until Link arrives so that he can send Zelda into the Dark World right in front of the young hero.[19] Just then, Link lands on the castle's highest tower and rushes to find Agahnim in the middle of his spell. Although Link tries to harm the wizard with the Master Sword, the weapon passes right through Agahnim,[20] which causes him to turn around and paralyze Link by only looking at him.[21] Agahnim then casts Zelda into the Dark World,[22] triumphantly mocking Link that not even the legendary hero could stop them from obtaining the Triforce.[23]

As Agahnim continues to ridicule Link,[24] the Master Sword begins to shine while Link is still frozen. Link's rage towards Agahnim begins to channel through the Master Sword, which causes for the castle to begin to crumble down.[25] Agahnim and Link begin to battle, and Link uses the sword to turn back Agahnim's magic against him and successfully defeat him.[26] Bested by Link, Agahnim reveals that him being killed will not restore the Wise Men's seal, and with his final breath transports Link to the Dark World as Hyrule Castle crumbles to reveal the Pyramid of Power.[27]

Towards the end of the comic, when Link, Princess Zelda, and Roam reach Ganon's Tower, an illusion of Agahnim approaches Zelda. Although Roam successfully interferes and saves the princess's life, he is killed by Agahnim, and Ganon himself soon rises from the defeated illusion.

In the A Link to the Past manga by Akira Himekawa, Agahnim is given a backstory as a friend to Link's Father. He studied to become a magician while his friend trained to become a Knight of Hyrule.[28] When Link's father told him the story of the Imprisoning War and the Triforce, Agahnim became intrigued and researched for ways to break the ancient seal.[29] When Link's father confronted him about his investigations, he used his magic to trap Link's parents in the Dark World. He then struck a bargain with Ganon: he would undo the seal of the Sages and Ganon would grant him powerful magic.[30]

Agahnim also exhibits some attraction to Princess Zelda, as he tells her just as he is about to send her into the Dark World.[31] Eventually, he succeeds in reviving Ganon, but quickly learns the hard way that Ganon was unwilling to share any power, being struck down as Ganon denounces him as a mere mortal.

Agahnim also appears in the earlier A Link to the Past manga by Ataru Cagiva. His portrayal is similar to that of the game, but the manga shows him doing good deeds with his magic so that the people will not suspect his treachery, such as reviving a puppy that was run over by his carriage.[32] Agahnim later kidnaps Zelda by sneaking in through the Sanctuary, and later tries to kill the King of Hyrule, though unlike the game, the King survives. Later, he and Blind the Thief plot to unleash Ganon upon Link and his allies.

Agahnim appears as a Spirit with the Magic Attack 🠅 ability in Super Smash Bros. Ultimate, which increases the attack power of a Fighter's Magic attacks.

The following information may not be trivia.

Please incorporate it into the main body of this article as per policy. Irrelevant or repeated facts may be removed.
See Help:Article Reorganization for more information.