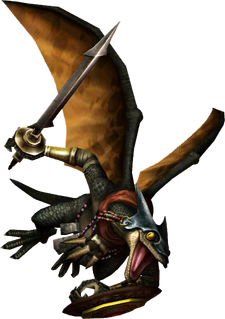 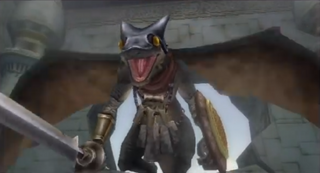 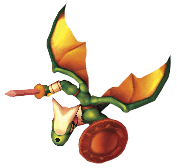 Clawshot
Master Sword
Aeralfos are recurring enemies and bosses in The Legend of Zelda series.[1][2] They are winged reptilian enemies armed with swords and shields.[1]

In Twilight Princess, the Aeralfos appear as mini-bosses.[1] One is first encountered in City in the Sky,[1] and later in Hyrule Castle.[1] They also appear in the Cave of Ordeals. Their wings give them the ability to initially avoid most of Link's attacks with the Sword and other weapons. They are lightly armored and bear a tribal loincloth adorned with sharp fangs.

When Link first encounters an Aeralfos, it will hover in the air, far out of his reach. It will frequently make dive attacks but will also raise its Shield before doing so to block any projectiles Link may use to stop him from initiating the attack.[1] When its Shield is raised in this fashion, Link can use the Clawshot to latch onto its Shield and pull the Aeralfos down to the ground so that he can attack it with his Sword.[1] As long as Link can maneuver around the Aeralfos' attacks and strike where it is unprotected, it will be unable to get back into the air.

The Aeralfos which Link encounters in the City in the Sky uses slightly different tactics than others of its kind. It will frequently fly through various large holes in the room and try to confuse Link. This forces him to constantly be alert and searching for the opening from which it will strike next. If Link can pinpoint the Aeralfos, he can use his Clawshot before the Aeralfos initiates its dive attack. Once the Aeralfos is on the ground, Link can defeat it in the same fashion as the rest of its kind. The Aeralfos guards the dungeon's item, which is a second Clawshot.[3]

In Tri Force Heroes, Aeralfos appear as enemies in the last Stage of Dragon Citadel. They fly in the air, breathe gusts of wind and attempt to dive at the Links below, and attack them with their sword, finishing off with a Spin Attack. They can be dangerous enemies to contend with, as their attacks can potentially inflict a lot of damage at once. Their backsides however are unprotected, so the Links can attack it from behind after it dives to attack. This is especially effective if a Link provokes an Aeralfos to dive towards him, and the other Links attack it from behind. The Link in the path of an Aeralfos' attack can also use a well-timed Gripshot to grab and discard its shield, leaving it more vulnerable to the Links' strikes.

A stronger variant called Super Aeralfos appear as enemies in the Sky Temple.

In Link's Crossbow Training, Aeralfos appear as enemies in Level 7: City in the Sky. Their attack patterns are similar to their Twilight Princess appearance; they dive-bomb at Link while defending themselves with their shields. However, their attack can be interrupted after being shot by the Crossbow, after which they will fly around the field momentarily. They can be taken out in one shot with a charged up Bomb Arrow.

Aeralfos appear as elite enemies in Hyrule Warriors. They move around the battle field by flying close to the ground, and attack their enemies by swooping down at them. Aeralfos possess a number of other attacks as well, including breathing fire. Aeralfos may breathe a stream of fire around them before briefly landing, or stab the ground with a thrust of their sword, creating a small shockwave. Whenever they land, their Weak Point Gauge is exposed, leaving them open to direct attack. Like the Aeralfos of Twilight Princess, their shields can also be grappled onto using the Hookshot while they are in flight. Doing so lets the attacking Warrior strike them midair, and also exposes their Weak Point Gauge. Using the Hookshot while they are creating a fire shockwave also exposes their Weak Point Gauge through an Extra-Effective Item Attacks.

When defeated, they may drop Aeralfos Leather as Bronze Material, and occasionally Round Aeralfos Shields as Silver Material.