Acheman are enemies from Zelda II: The Adventure of Link. They are an offshoot of the Ache monsters and have the ability to shapeshift from a bat to a demonic, humanoid state. While in the demon state, they have the ability to shoot fireballs from their mouths. When Link nears a Acheman, it swoops down, lands on the ground and transforms into the humanoid state. It is easiest to defeat it when it is in its humanoid state since it is bigger and on ground level. Link gains ten experience points for defeating an Acheman.

Given their demonic appearance and abilities, it is possible that they are members of the Demon race. 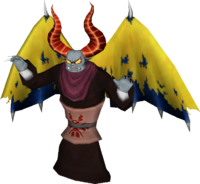 Batreaux from Skyward Sword somewhat resembles a Acheman and may have been inspired by them and the Ache (his desire to become and eventual transformation into a human could be a reference to the Ache shapeshifting into human villagers in Zelda II).

Retrieved from "https://zelda.fandom.com/wiki/Acheman?oldid=543721"
Community content is available under CC-BY-SA unless otherwise noted.