Not be confused with Keese or Achemen. 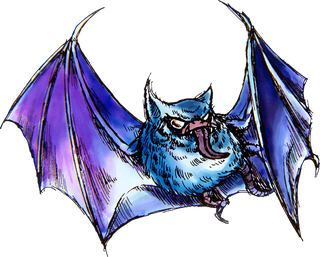 Aches are bat enemies appearing in The Adventure of Link.[1]

In The Adventure of Link, Aches usually appear in a blue variety found commonly in caves, and sometimes in Trees.[1] Their method of attack is to hang from the branches or ceiling, and swoop down in a pointed arc towards Link, returning to their roosting point. This makes them hard to hit and avoid, but they are rather weak and more of an annoyance than a real threat.

Purple Aches are slightly different from their more common counterparts. Called "Eyes of Ganon" by townsfolk,[2] Aches can disguise themselves in the villages of Hyrule as ordinary Hylians. Almost anyone Link meets in Saria Town or Darunia Town may be an Ache in disguise, and they often reveal themselves and attack if Link talks to them, striking unexpectedly. Not only this, but purple Aches can vary wildly in strength; they usually do minor damage and take a single strike to defeat, but sometimes they may be much stronger and able to withstand a huge number of hits, similar to Bubbles.

In Nabooru Town, a lone red Ache roosts on the ceiling of one building. It will not attack, and if Link jumps up he can speak to it, but it will not say anything. If Link persists, it will break its silence and reveal a secret to him.[3]

The Acheman is a close relative to Aches.

An Ache makes a brief appearance in "The Ringer" episode of The Legend of Zelda TV series. Like the rest of Ganon's minions, the Ache is capable of speech. When Ganon arrives disguised to the Magician's Contest being held in North Castle, he turns a bird into an Ache and orders it to go see who is guarding the Triforce of Wisdom.[4] The Ache then flies off to the tower where the Triforce and Link are located and sees that Link and Spryte are next to the sacred relic. The flying foe then returns to Ganon and informs him that the young hero is guarding the Triforce.[5]