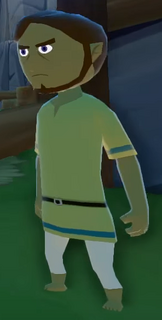 Abe is a character in The Wind Waker.[2]

Abe lives on Outset Island,[2] on which he was born.[1] He is married to Rose and together, they had two sons: Joel and Zill.[2] He is interested in Wild Pigs, and in the beginning of the game he can be seen trying to catch a black pig by awaiting it from behind a palm tree. He gives Link some hints on how to catch pigs. When Link returns later in his adventure, Abe will be just outside of his house next to the fairly grown pig. Abe will also ask the young hero later on in the game to take the Pig out for a walk.[3]

Abe's name could be derived from Abraham Lincoln, with whom he shares similar facial expressions and facial hair. This is reinforced by the fact that his Spanish and German name are "Abraham".