Zelda Wiki
Register
Don't have an account?
Sign In
Advertisement
in: Eldin Canyon, Mines, Locations, Locations in Breath of the Wild 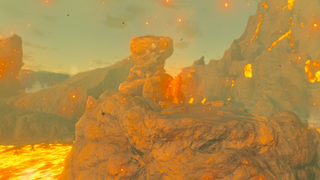 The Abandoned North Mine is a location in Breath of the Wild.[1]

The Abandoned North Mine is a disused quarry to the northwest of Goron City in Eldin Canyon. It is denoted as Death Mountain Marker #6.[1] The Mine is situated within Darunia Lake, consisting of a shore and several small islands scattered across the lake. Updrafts created by the lake's lava can be used to reach these islands by carrying Link while using the Paraglider. The Mine's northernmost island has a crag known as the Vault.[2] A number of Cannons belonging to Bludo are stationed around the shore and islands,[3] which are operated by striking their levers to move them, and inserting a Remote Bomb into their compartments to detonate them. These Cannons can be used to destroy debris and some structures around the Mine. Further up the main road is a slope leading to a tunnel inhabited by Rock Octoroks, which leads to the Stolock Bridge that crosses over Goron City. A rail track connecting between the Mine and the Isle of Rabac begins at the Mine's shore. Its mine cart is stationed here and can be moved by detonating a Remote Bomb in its compartment.

The Mine was once used by the Gorons to mine for Gems,[4] but was abandoned when it grew too hot due to Divine Beast Vah Rudania's rampage.[5] Since then, more lava and monsters have appeared.[6] More specifically, the Mines are now inhabited by Fire-Breath Lizalfos, who have built a fort and several watchtowers around the vicinity of the Mine. These towers are guarded by Lizalfos armed with Bows equipped with Fire Arrows.

Yunobo had went to the Abandoned North Mine to find painkillers for Bludo, so he could operate the Cannon at the Bridge of Eldin to drive Vah Rudania away. However, Yunobo failed to return. Bludo sends Link to find him in his stead, forming a part of the Divine Beast Vah Rudania Main Quest. A Goron miner there named Drak informs Link that Yunobo went to the Vault. However, Link finds that its entrance is blocked due to a rock slide that was caused by a Magma Bomb.[7] Link uses the nearby Cannon to blast away the rocks, freeing Yunobo. Although Yunobo at first thinks Link is a monster, he thanks him and runs off to deliver Bludo's painkillers. Inside the Vault, Link can find a Cobble Crusher and two Treasure Chests containing a Purple Rupee and ten Ice Arrows.

A rubble of stones on the east islands can also be blown away using a Cannon, revealing a Rare Ore Deposit and an Ore Deposit underneath.

A hidden Korok is found atop the Vault's peak, who will give Link a Korok Seed once investigated.